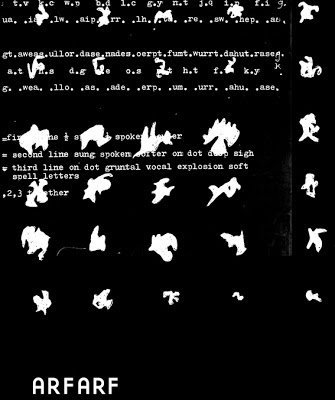 The Australian sound poetry / film-maker / artist group Arf Arf consists of Marisa Stirpe, Frank Lovece, Michael Buckley and Marcus Bergner. Between 1985 and 2000 they produced and mounted hundreds of live performances in Australia and Europe. Their film 'Thread of Voice' (with Bob Cobbing / Konkrete Canticle) has been shown widely including at The Serpentine Gallery, London, The Pompidou Centre, Paris, Arsenal Kino, Berlin, Millennium, New York and at the Museum of Modern Art in Warsaw and Sydney. Presently the group is completing an anecdotal/collaborative/performative novella based on their previous performances.

Since three-quarters of the sound poetry group Arf Arf are unable to attend this launch of their DVD collection in Berlin, it seems only appropriate to underline this missing by evoking or rousing various luminaries who influenced and inspired the group over the years (figures such as Mina Loy, Gloria Fuentes, August Stramm, Gunther Eich, Benjamin Fondane amongst others). Marcel Schwob’s Imaginary Lives with its emphasis on errant details and misaligned directives over everything usually deemed substantive or historical was always a long-term reference point for the group. Collaboration and the accidental also played an important role in everything, and as such, in a lamentable but enthusiastic act of proxy Marcus Bergner, Toine Horvers and others will reflect and extend on the work of Arf Arf at this event.

“The artistic work of Arf Arf, across all the media they use, is vivid, kinetic, involving, very humorous, full of the rawness and randomness and mysteriousness of life. It is an extremely heterogeneous art, clashing different styles, timbres, textures. It is both sophisticated, deeply considered, and also spontaneous and immediate in its poetic and emotional effects. It’s full of almost violent juxtapositions and gear shifts - as well as sudden, lyrical passages of calm, poetic grace. Australia has produced few bodies of artistic work this captivating or internationally significant. (...) ARF ARF use written text as the starting point for sounds, reversing both the process of civilization and the cultural process, in this way descending to the bottom of civilization. All texts of culture transform into the primal sound from the time when it was not yet a letter, a word, or a text. Suddenly, the self-evident proves to be a mystery….” (Excerpt from: HOW THE WORD BECAME A SOUND by Łukasz Guzek (tr. Robert Gałazka).

Dutch artist Toine Horvers (born 1947) started in 1969 as a visual artist with movement experiments using his body as a way to explore the relation between time and space. Soon after, performances followed in which he connected these movements with actual architectural space and actual time, for instance by performing a piece over 24 hours. Sound, in the form of monotone voices or constant drum-rolling, became an important element in these works: sound as a means of making human energy spatial and perceptible. Horvers used to call his immaterial works ‘sculptures’ as an attempt to create statements of energy. Through the years language has increasingly become his source of inspiration, becoming both concept and matter and appearing in individual and group performances as well as in installations, books and electronic text displays. The source however is always his fascination for the intangible relation between time and space which he expresses in forms, patterns or procedures that often show similarity with patterns and procedures in ritual ceremonies as well as in childrens' games. 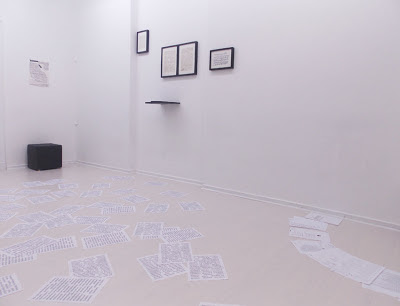 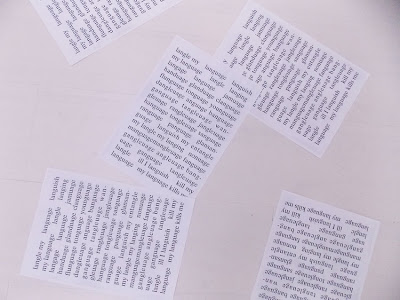 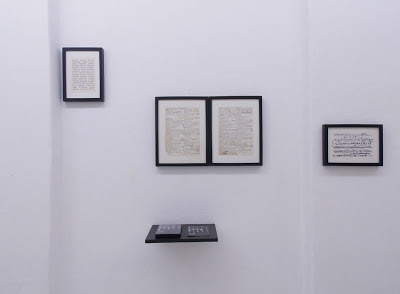 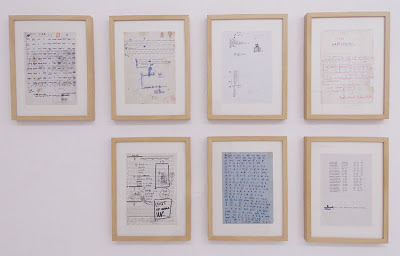 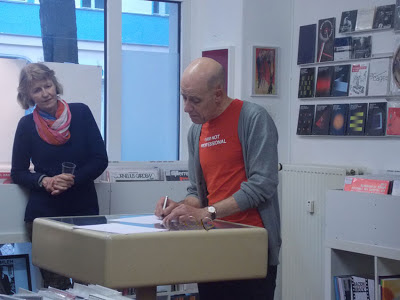 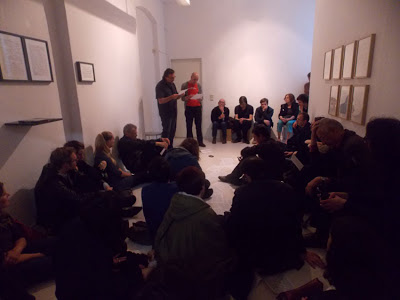