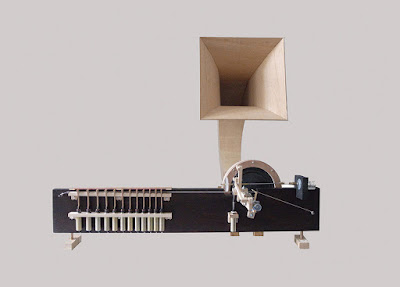 Over the last four decades media artist Martin Riches has designed and produced a sizeable array of kinetic objects, sound sculptures, acoustic speech synthesizers, music machines and interactive audio-visual installations. Born in 1942, his first one man show was in 1973 and since 1987 he has worked exclusively as an artist. Having originally trained as an architect, Riches incorporates a strong engineering aesthetic into his work, concealing nothing and he has made the transparency of his machines one of their substantive virtues – the very opposite of a black box. His music machines, speaking machines and other sound objects have inspired many composers to write for them and so they are shown in not only in art and media exhibitions but also in concerts and as collaborative sound installations.

“StringThing consists of two automatic one-string instruments, each with a range of one octave. Apart from their strings, which are tuned a forth apart - E and A - the instruments are identical but are mirrored, so that they present a symmetrical image when they stand, left and right, on the concert platform.

I had previously made an automatic violin which was based on a real violin – a cheap one – with the fingers and a bow-mechanism added. This time, the sound of each string is amplified by a horn. The bridge is connected to a diaphragm made of carbon fibre (looking rather like a loud speaker) which leads to a large wooden horn. This system was inspired by the loud and directional horned string instruments developed by Augustus Stroh in 1899 that were widely used in early sound recording; three Stroh instruments directed at the horn of the recording phonograph were sufficient to replace a large string section. They were also often used in jazz and dance bands until the 1940s.  My interest in horned stringed instruments and early recording techniques was awakened by Aleks Kolkowski who owns a collection of original Stroh instruments and regularly performs with them.

StringThing has been programmed to play a duet “things for things“ by Makiko Nishikaze. Each part is burned into a chip and then inserted into its instrument. The two instruments are switched on simultaneously and then each plays its own part completely autonomously but in what seems to be close interaction with its partner.“ 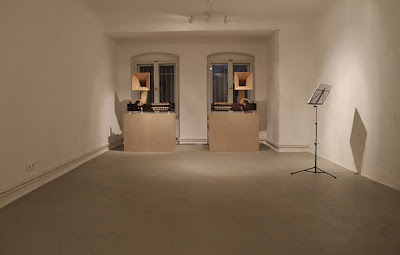 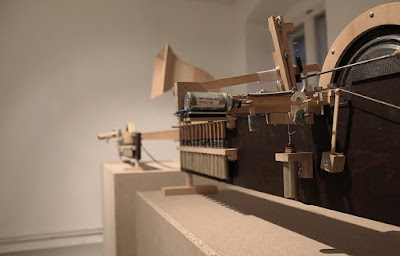 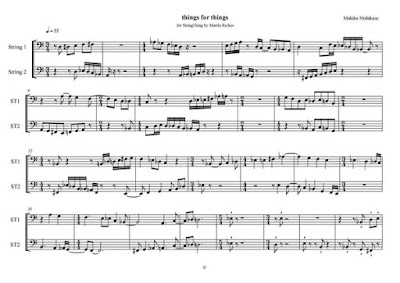 first page of things for things by Makiko Nishikaze 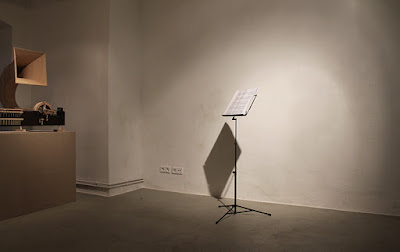